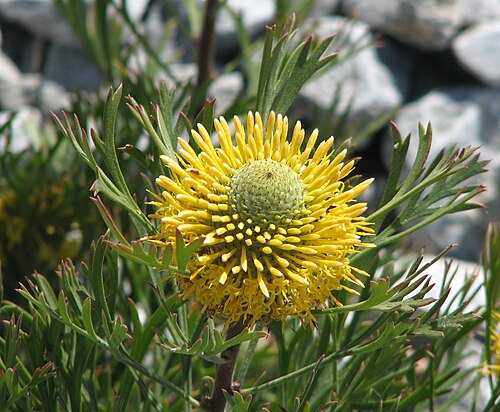 Wikipedia article of the day is Isopogon anemonifolius. Check it out: https://ift.tt/HKa4bb Summary: Isopogon anemonifolius is a shrub of the family Proteaceae which is native to eastern New South Wales in Australia. It occurs naturally in woodland, open forest, and heathland on sandstone soils. Described in 1796 by Richard Salisbury, I. anemonifolius usually ranges between 1 and 1.5 metres (3 1⁄4 and 5 feet) in height, generally being smaller in exposed heathland. Its leaves are divided and narrow, though broader than those of the related Isopogon anethifolius, and have a purplish tinge during the cooler months. The yellow flowers appear during late spring or early summer and are displayed prominently. They are followed by round grey cones, which give the plant its common name drumsticks. The small hairy seeds are found in the old flower parts. A long-lived plant (up to 60 years), I. anemonifolius resprouts from its woody base after bushfire. It grows readily in the garden if located in a sunny or partly shaded spot with sandy soil and good drainage.