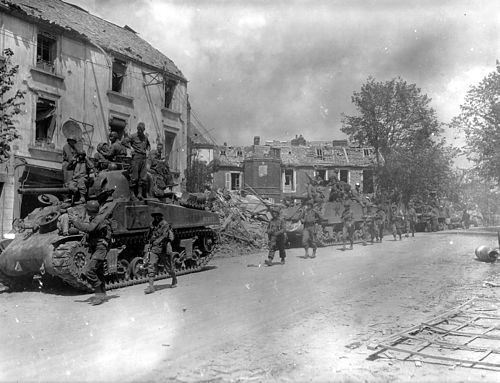 Wikipedia article of the day is Operation Cobra. Check it out: https://ift.tt/29GIPgx Summary: Operation Cobra was an offensive launched by the First United States Army under Omar Bradley against the German 7th Army commanded by Paul Hausser in the Cotentin Peninsula during the Normandy campaign of World War II. The attack commenced on 25 July 1944, having been delayed several times by poor weather. Supporting offensives had drawn the bulk of German armored reserves toward the British and Canadian sectors, and the lack of men and materiel available to the Germans meant they were unable to form successive lines of defense. After a slow start the offensive gathered momentum and by 27 July most organized resistance had been overcome and the Americans advanced rapidly. The German response was ineffectual and the entire Normandy front soon collapsed. Operation Cobra, together with concurrent offensives by the British Second Army and the Canadian First Army, was decisive in securing an Allied victory in the Normandy campaign and the loss of the German position in northwestern France.