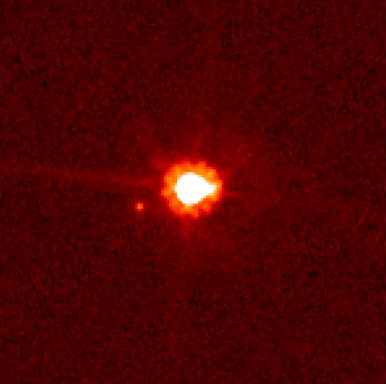 Wikipedia article of the day is Eris (dwarf planet). Check it out: https://ift.tt/1g93yqr Summary: Eris is the second-largest known dwarf planet in the Solar System, slightly smaller by volume than the dwarf planet Pluto, although it is 27 percent more massive. Discovered in January 2005 by a team based at Palomar Observatory, it was named after Eris, the Greek goddess of strife and discord. The ninth-most-massive object directly orbiting the Sun, Eris is the largest object in the Solar System that has not been visited by a spacecraft. It is a member of a high-eccentricity population known as the scattered disk and has one known moon, Dysnomia. It is about 96 astronomical units (14.4 billion kilometres; 8.9 billion miles) from the Sun, roughly three times as far away as Pluto. Except for some long-period comets, Eris and Dysnomia were the most distant known natural objects in the Solar System until 2018 VG18 was discovered in 2018. Observations of a stellar occultation by Eris in 2010 showed that its diameter was 2,326 ± 12 kilometers (1,445.3 ± 7.5 mi).