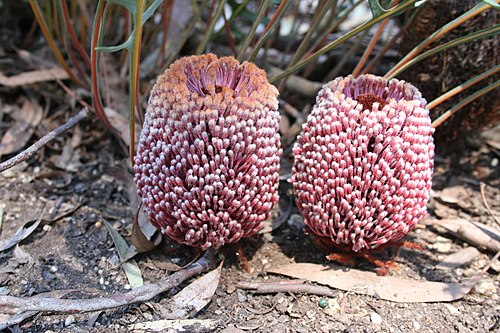 Wikipedia article of the day is Banksia blechnifolia. Check it out: https://ift.tt/2ESI9HW Summary: Banksia blechnifolia is a species of flowering plant that was first described by Victorian state botanist Ferdinand von Mueller in 1864. Its leaves are reminiscent of the fern genus Blechnum. B. blechnifolia is one of several closely related species that grow as prostrate shrubs, with horizontal stems and thick, leathery upright leaves. The red-brown flower spikes are up to 20 centimetres (8 in) high and appear from September to November. As the spikes age, they turn grey and develop as many as 25 woody seed pods. Insects such as bees, wasps, ants and flies pollinate the flowers. Found in sandy soils in the south coastal region of Western Australia in the vicinity of Lake King, B. blechnifolia is non-lignotuberous, regenerating by seed after bushfire. The plant adapts readily to cultivation, growing in well-drained sandy soils in sunny locations. It is suitable for rockeries and as a groundcover.