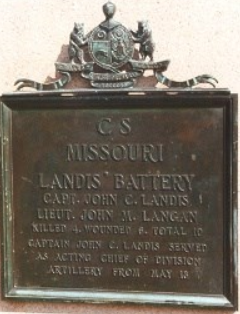 Wikipedia article of the day is Landis’s Missouri Battery. Check it out: https://ift.tt/2M8teeN Summary: Landis’s Missouri Battery was an artillery battery that served in the Confederate States Army during the early stages of the American Civil War. The battery was formed in late 1861 and early 1862, and was crewed by a maximum of 62 men. It fielded two 12-pounder Napoleon cannons (example pictured) and two 24-pounder howitzers. The battery saw limited action at the Battle of Iuka before providing artillery support at the Second Battle of Corinth, both in 1862. It formed part of Confederate defenses at the battles of Port Gibson and Champion Hill in May 1863. The unit may have suffered the capture of two cannons during the Battle of Big Black River Bridge. Landis’s Battery next saw action during the Siege of Vicksburg, but was captured when the Confederate garrison there surrendered on July 4. Although the surviving men of the battery were exchanged, the battery was not reorganized; instead, it was absorbed into Guibor’s Missouri Battery along with Wade’s Missouri Battery.