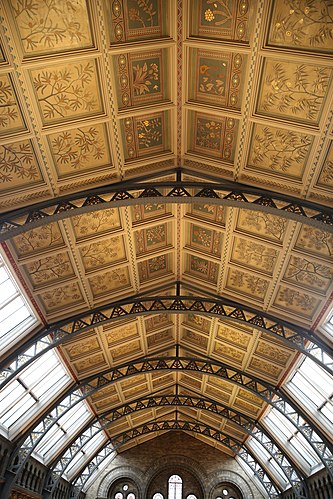 Wikipedia article of the day is Ceilings of the Natural History Museum, London. Check it out: https://ift.tt/333TaBT Summary: The decorated ceilings of the Natural History Museum in South Kensington, London, were designed by the museum’s architect Alfred Waterhouse, and were unveiled at the building’s opening in 1881. The ceiling of the large Central Hall (pictured) consists of 162 panels, 108 of which depict plants considered significant to the history of the museum, to the British Empire or to the museum’s visitors. The remaining 54 are highly stylised decorative botanical paintings. The ceiling of the smaller North Hall consists of 36 panels, 18 of which depict plants growing in the British Isles. Both ceilings make extensive use of gilding for visual effect. Built of lath and plaster to save costs, the ceilings are unusually fragile and require extensive maintenance and restoration. Since 2016 the skeleton of a blue whale has been suspended from the ceiling of the Central Hall.