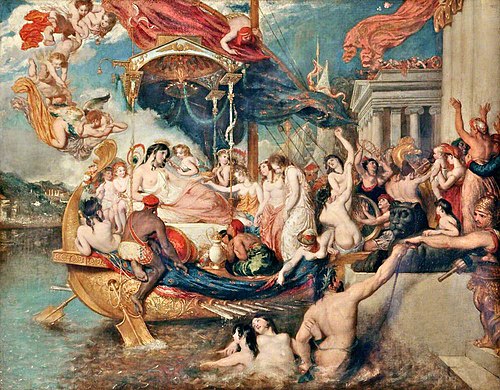 Wikipedia article of the day is The Triumph of Cleopatra. Check it out: Article-Link Summary: The Triumph of Cleopatra is an oil painting by the English artist William Etty, depicting a scene from Plutarch’s Life of Antony and Shakespeare’s Antony and Cleopatra, in which Cleopatra, Queen of Egypt, voyages to Tarsus to cement an alliance with the Roman general Mark Antony. The painting shows a large group of people in various states of nudity, watching her ship’s arrival. First exhibited at the Royal Academy Summer Exhibition in 1821, the painting was an immediate success and made the then-obscure Etty famous almost overnight. Although some commentators considered it offensive and indecent, the painting’s success prompted Etty to spend the next decade painting further history paintings containing nude figures, becoming well known for combining these with moral messages.