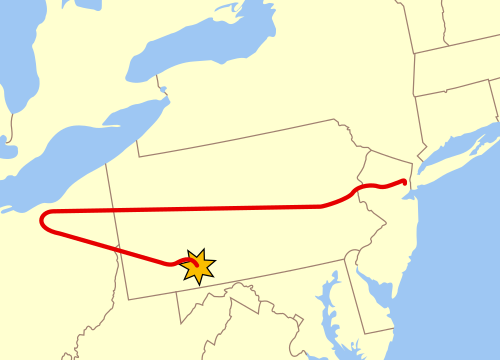 Wikipedia article of the day is United Airlines Flight 93. Check it out: Article-Link Summary: United Airlines Flight 93 was a passenger flight that was hijacked by four al-Qaeda terrorists in 2001 as part of the September 11 attacks. The hijackers stormed the westbound aircraft’s cockpit 46 minutes after its takeoff from Newark, New Jersey, and diverted it in the direction of Washington, D.C., the U.S. capital. Several passengers and flight attendants learned of the other 9/11 suicide attacks from phone calls, sparking an attempt to retake the plane. During the struggle, the hijackers deliberately crashed the plane into a field near a reclaimed strip mine in Stonycreek Township, Pennsylvania; all 44 people on board (including the hijackers) were killed. A temporary memorial was built near the crash site soon after the attacks. The permanent Flight 93 National Memorial was dedicated on September 10, 2011; it has a concrete and glass visitor center overlooking the crash site.